The Open Lecture "European Integration and Democracy" by prof. Philippe Schmitter, Emeritus at the European University Institute, took place on 6 March at the School of Political Science of Florence.

The lecture proposed by professor Philippe Schmitter addressed the issues of the crisis of the Euro, of European Democracy and of European Integration.

"The present crisis has greatly increased the magnitude of virtually all these features of citizen desencanto. They are affecting parliamentary, presidential and semi-parliamentary democracies, centralized and federalized ones, two and multi-party ones, central and peripheral ones, new and old ones. Nor have these “morbidity symptoms” been confined to a particular segment of the ideological spectrum – even if, in the short run, they seem to have had more of an impact upon the ‘progressive’ forces of the Left that advocate a greater rather than a lesser role for active state intervention in order to provide greater personal security and equality among their citizens". 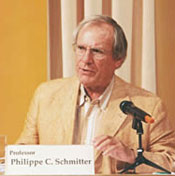